This is one of my favorite scenes of all time.  It beautifully sums up my life before meeting the love of my life that I married thirteen years ago today. Like Toula, my family did not think I would ever get married. Depending on who you asked, I was too educated, too chubby, too picky, too busy, and/or too stuck up.  It was 2001. I was 27-years-old, single, living by myself, no children, and working a very demanding job to which I was completely devoted.

My extended family would often ask me if I wanted children or to get married.  Many of my cousins had already had beautiful children of their own.  I, in frustration, would say, “No! I don’t want kids! Why do you care what is in my womb instead of my head? Why don’t you ask me about my law degree or encourage me to get a PhD instead of pregnancy?” I was not humble about my educational accomplishments at this stage in my life. I had worked hard to finish college and law school and I remember feeling frustrated because I thought my family did not care. “Besides,” I told them, “I can’t have kids until I meet the father. I can’t meet the father until I’ve met the husband. I can’t meet the husband, until I’ve met the boyfriend. I can’t meet the boyfriend until I meet the best friend! There is an order for me!” I was very traditional.

According to my family, then, my options were severely limited and I started to believe them. What made it even more challenging was that my younger sister was already married and definitely wanted children.  My fate, it seemed, was to be the “really cool Tia [Aunt] Mari.” I would tell my sister, “I’ll be the aunt that takes your kids on trips and stuff.”

Still, I was “in love” or so I thought.  His name was “Dr. Sean.” We met when he was in med school and I was in law school.  Match made in heaven right? Doctor and a lawyer? He was, I thought, the epitome of perfection.  I was, on the other hand, completely invisible. I swear I was the classic “friend” character in all those cheesy, 80s, unrequited love movies. Strange. Awkward. Not quite pretty but not completely heinous either.  I was Ducky.

So how does a gal from Battle Creek meet a guy from Boston?  Answer: Summer Camp in Fredericksburg, VA. I had just finished taking the Bar Exam for the second time. I was determined to do something to help me forget the most evil exam on the planet. So…I decided to volunteer at a summer camp for kids in Fredericksburg, VA.  Yes, I decided to spend a week in the middle of nowhere, in the woods, being a camp counselor to eight year old girls! THAT experience was less stressful than the Bar Exam!

A few weeks before camp, I emailed the camp director asking if there was anyone who could pick me up from the airport.  Greg volunteered.  We exchanged a few emails and then I disappeared into the Bar Exam abyss.  Weeks passed. When I emerged, I gave him a call and said, “Hi Greg! This is Marisela. Are you still going to be able to pick me up from the airport tomorrow?” Little did I realize that Greg was in Seattle for business and was set to take the red eye back to Virginia that night. This poor guy is now going to have to fly home, sleep for a few hours, and then pick up this crazy Chicana from the airport which was furthest from his house.  I was a mess. He was the mop.

At the time I was going through a pathetic “Are you the One?” stage where I “fell in love” with every guy I met. Yes, Dr. Sean was my fantasy Boo but it was becoming pretty clear that he was not at all into me.  I remember sitting on the plane frustrated with myself.  I leaned my head against the window and thought, “Please…please don’t let me like this guy. He’s obviously really nice because he is picking me up but I just. want. to be. friends.”

I got off the plane and he was not there. This was before 9/11 when people were able to meet you at the gate.  I began walking down the hall and saw this frantic looking, older gentleman with glasses and no facial hair who was sporting “The Kennedy Swoop” for a hairstyle.  I remember thinking, “YES!!! There is no way I could be attracted to him!” I had a thing for facial hair and he was older.  Then I saw his hand and he had a ring on his finger.  Double yes!!! He’s off limits.

We exchanged hellos and pleasantries and walked out to his Saturn station wagon. “So…will your wife be volunteering at camp too?” I ask.  He let out a tremendous sigh.  “Well,” he said, “you are going to find out sooner or later.” In just over an hour, I learned about how, after 15 years of marriage, she cheated on him and broke his heart. He spilled his guts.  It was clear he was still in so much pain and my heart went out to him.  I asked him why he still wore his ring.  He said, “I won’t take it off until the divorce is final.  I don’t want anyone to think I am available when I’m not.” It was during that that car ride, we became friends.  I had never had such an open, honest, and vulnerable conversation with a man before.  And such integrity! This was a good guy.

Over the following week, we became even closer friends.  He was so kind and generous. Here I was going to volunteer at a summer camp and I brought NOTHING with me except clothes. No sleeping bag. No bug spray. No flashlight. Nothing.  He carted me all around Northern Virginia and helped me get the supplies I needed.  He had a cabin full of eight year old boys. I had a cabin full of eight year old girls.  We helped one another and encouraged each other that entire week.  My favorite moment was our shaving cream fight. He had this look of absolutely bliss on his face. I liked seeing him happy.

I returned to Michigan and we continued to keep in touch via email.

I’ll never forget when things changed for us.  According to Greg, it was just after 9/11. We were talking about the phone calls people made from the planes. I told him I would call my younger sister.  He said, “I’m not that close to my family anymore so I don’t know who I’d call.” After a pensive pause I said, “You could call me.” [Insert awww].  I think we both began to look at one another differently that day.

Our friendship grew to the point that he wanted to take me out on an official date. His divorce was finalized in November and he scheduled a visit to Michigan over the Martin Luther King, Jr. Holiday in January.  That was supposed to be our first date but plans have a funny way of changing.

My parents were going through a divorce after 28 years of marriage. It was our first “broken” Thanksgiving and I was miserable bouncing from one place to another!! They say divorce hurts children. It hurts adult children too. I was determined not to play musical households again.  I decided I was going to volunteer…over Christmas…in New York City. I found a soup kitchen in the Bronx and was going to ask a friend from high school if I could crash with him.  That was my plan.  Fly to NYC, stay with JD, and volunteer in the Bronx. Greg, needless to say, was concerned about my plan…especially since I hadn’t heard from my friend and I was set to fly out the next day.  “That’s okay,” I said, “I will find a hotel online.” Priceline and Hotwire were just beginning to grow and the deals for Times Square were AWESOME!!

Needless to say, he was a bit concerned so he suggested an alternate plan.  “Why don’t I come up there and we can have our first date? I have to come back to work the next day but then I’ll go back and pick you up on my way to Boston. Would you like to spend Christmas with my family in Boston?”

I landed at the airport. Butterflies in my stomach.  What if I don’t like him? What if we don’t click beyond friendship? What if he doesn’t like me? I walked out and saw him. He gave me the biggest bear hug and just knew everything was going to be okay.  “You look nice,” I said as we started walking. He began putting himself down.  I stopped. “Let’s try this again…you look nice Greg…and you say….” He laughed, “Thank you! Sorry…I’m not used to compliments.”

He took me to the Rockettes Christmas Spectacular. It was amazing.  Then we went to Rockefeller Plaza Christmas Tree to exchange presents.  I opened my presents. The first was a very matronly looking sweater.  The second was pretty earrings. It was the third one that floored me.  The third gift was a Peanuts sculpture of Lucy at her “The Doctor is In” advice booth. “No way!! No way!” I screamed. “You have to open yours!” His gift: a musical snow globe of Lucy and Charlie Brown at the advice booth!

We gave each other essentially the same gift! 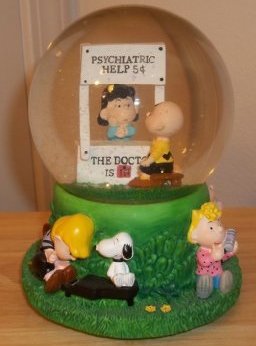 He returned to Virginia that night, came back to pick me up the next day, and drove me to Boston. We spent the next few hours, laughing, talking, sharing stories…falling in love. I met his hilarious, very Bostonian family.  I was stuffed with an authentic Italian dinner compliments of his grandmother.  I had the time of my life.

When I returned to Michigan, my boss said I was floating six inches off the ground. That was it. I was in love. We were meant to be. I found my best friend.  Ducky won!

One thought on “When Battle Creek meets Boston…”